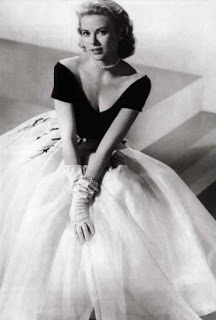 Grace Kelly (as Lisa Fremont) wears five separate outfits in Rear Window (1954) including one negligee. Three of these are exceptional standouts, each neatly representing a different sector of 1950s women’s fashion: dress, casual and tailored. 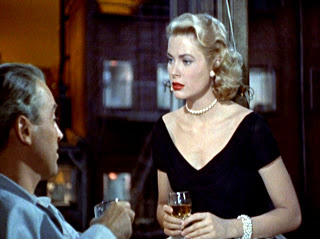 Fitted black bodice with deep V cut down to the bust and rear to the small of the back, off the shoulder neckline, cap sleeves.
Here Head actually seems to pre-date the Christian Dior ‘Ligne Corolle’ (Corolle line) she so openly emulates (dubbed the ‘New Look’ by American Vogue or Harpers Bazaar editor Carmel Snow, depending on who you ask) by forerunning the ‘Y’ silhouette as showcased by Dior for his 1955 collection. 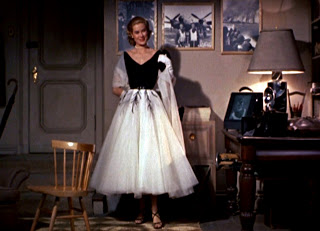 Full skirt to mid-calf, gathered and layered in chiffon and tulle, spray branch pattern on the hip, narrow black patent leather belt, nipped in waist.
The skirt wafts and swirls giving Kelly the presence of a ballerina. Incorporating the 1940s style floral spray is a typically delicate Head touch, softening the dress’ grandeur and hinting at the tomboyish, tree-climbing tendencies Lisa demonstrates when scaling Thorwald’s apartment later in the film. 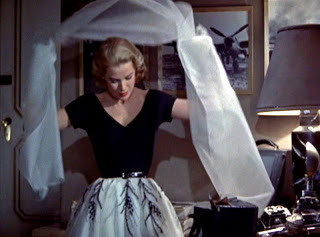 Black high heeled shoes with asymmetric straps. White chiffon shoulder wrap. White Elbow length silk gloves. Short, single row pearl necklace.
A shoulder wrap was common to the time as many haute couture gowns were either off the shoulder or strapless. The gloves are worn pushed down towards the wrists slightly – another style touch very much in vogue for the fifties. 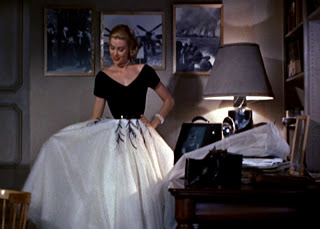 Really this might be the most famous and copied outfit Grace Kelly ever wore (Kelly lookalike January Jones sportedsomething similarin the ‘Shoot’ episode of sixties set TV drama Mad Men). 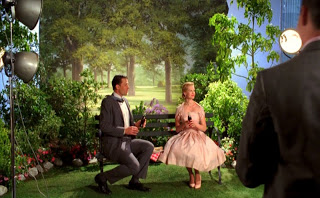 The look certainly establishes her most enduring cinematic image of ultra-feminised chicness; an image that unlike, say, Rita Hayworth’s contrived and performative screen sexuality, Kelly encapsulated in real life as well. 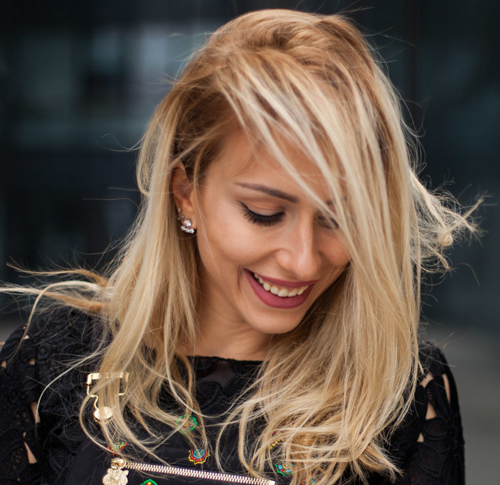 Hello! My name is Anastasija Djuric.

Welcome to Stasha Fashion Blog – my online fashion diary.   I am a mom now, so, besides fashion and outfits, this blog also includes travel, events, shopping reports, beauty and lifestyle posts and baby posts.

“Remember that happiness is a way of travel – not a destination.”

This error message is only visible to WordPress admins

Please go to the Instagram Feed settings page to create a feed.